Rockett's Tricky Decision
Rockett's New School is the first title in the Rockett Series.  It was developed in association with Convivial Design (AKA Convivial Studio) and Presage Software and released for Windows and Macintosh systems in September 1997.

New School, and its "sister" game, Secret Paths in the Forest, were the culmination of a 4-year market research project conducted by Brenda Laurel and the Interval Research Corporation into the play habits of girls, how they differed from boys, and how girls interact with computers, in order to better tap into the then nearly ignored demographic.  The game and its sequels' heavy emphasis on narrative were due to the finding that girls preferred strong stories in their games.[1]

The portfolio on Convivial's website refers to the game as Rockett's First Day. It is unknown if this was a working title or just a typo.  Their demo reel for the game also includes unused art and audio from the lunch line scene where Ruben tells Rockett that his band is playing at Max's party that weekend, an event that doesn't occur until the next game .[2]

A demo version of the game with different visuals was released in the summer of 1997 on a sampler CD[3].  The sampler came packed in with the September 1997 issue of Girls' Life magazine.

The gold build of the game appears to have been compiled on August 21st, 1997.  Many of the files on the disk were created on that date.

An anonymous staff member for the website stated in the October 2000 edition of Rockett Talk that the abrupt ending was changed in later printings of the game due to complaints from players.

Since the game itself acts like a visual novel, the player can flip through scenes at any time, as well as skip ahead to other 'chapters' in the story.  After every scene, the player is given three choices of how Rockett can emotionally react to the events occurring around her. The player can also access Rockett's backpack, a little extra in the game where the player can check messages from Rockett's friends, snoop through lockers, view her sketchbook, read notes, or review her diary entries.  Doing so allows the player to learn more about the other characters Rockett encounters and events that occur outside of the main plot.

During and after the story concludes, the player's choices can be played back and watched as a movie (without the choice screens).

While it's never outright stated in game, various locker items show that the game takes place on Tuesday, September 7th.

Rockett Movado enters Whistling Pines Junior High for her first day of 8th grade. Her first acquaintance is none other than Jessie Marbella, a kind girl who's eager to help Rockett out on her first day. The choices the player makes from this point on determine whether or not certain events will happen, but no matter what the player chooses, Rockett will always end up going to her locker by herself. There she will meet The Ones ' member Whitney Weiss and nerdy Mavis Wartella-Depew. Whitney says a few smart-alec things about Rockett's clothing, and before long, Rockett goes off to her first class, homeroom, with the cheesey, eccentric Mr. Baldus .

During class, Whitney plops down next to Rockett. Wondering why Whitney's suddenly wanting to hang around her, Rockett inquires about Whitney's new behaviour. Whitney tells Rockett that her 'best friend,' Nicole Whittaker, has been spreading rumours that Whitney went mini-golfing with the dorky Arnold 'Zitbomb' Zeitbaum. The principal, Mrs. Herrera , arrives and instructs Rockett to come up to the front of the class and introduce herself. Rockett shares some of her interests, the class ends, and Rockett goes off to lunch. But lunch at Whistling Pines brings about crazy experiences including nasty stares from a girl dressed almost exactly like Rockett, 'bathtub-plug' hamburgers (as Rockett calls them), as well as the most obnoxious lunch attendant working behind the counter. After a bad-run in with the head of food services, Mr. Bill Pill , Rockett finds a place to sit (either with the One's, with kind musician Ruben Rosales or by herself), eats lunch, and then heads off to art class.

In art class, Rockett meets friendly super-student Miko Kajiyama and her friend Nakili Abuto. Another girl, Dana St. Clair, walks into the art room. Rockett realizes that Dana is the girl with the same outfit who was glaring at her during lunch. Mr. Rarebit , the art teacher, gives Rockett a tie-dyed shirt to keep from the paint bin to avoid any more confrontations about the whole outfit-scenario. Mr. Rarebit then appoints Rockett to the yearbook staff, after catching some of her art in action. Miko, who had been eyeing the position in the first place, senses favortism and becomes angry with Rockett.

Back in the girls' washroom, Rockett finds a notebook containing extremely private information about one of the cliques at school (the player doesn't find out until the third game ). In the bathroom, Rockett makes peace with Miko. Just as the two girls leave, Rockett's best friend from her old school, Meg O'Riley appears in the mirror, and an excited Rockett ends her first day at Whistling Pines.

SuperKids states that New School "sets the stage for a potentially enjoyable series", stating that its older kid reviewers enjoyed the story and the locker-searching mechanic. However, one parent noted that the player never makes important ethical decisions, like whether or not to read the diary Rockett finds, even though they make many smaller, unimportant ones. Multiple reviewers also felt disappointed and confused by the game's abrupt ending.[6]

Megan Murray of Through the Glass Wall criticizes the game for the plot's focus on stereotypical girl concerns like fashion and cliques, the questionable ethics of the locker-viewing mechanic, and the frequent use of stereotypes in different students' characterizations. As well as the fact that the choices presented have no real impact on the story or Rockett's reputation.[7] 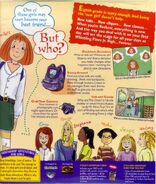 Back cover of the boxed version

An beta version of the bathroom scene 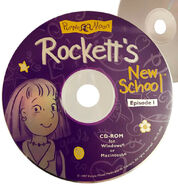 Jewel Case
Add a photo to this gallery 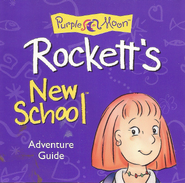 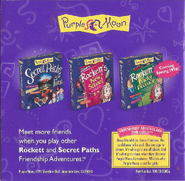 Add a photo to this gallery

Retrieved from "https://purplemoon.fandom.com/wiki/Rockett%27s_New_School?oldid=6371"
Community content is available under CC-BY-SA unless otherwise noted.